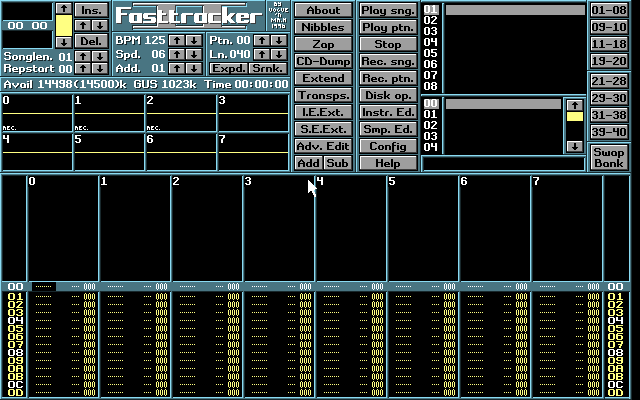 Here is a collection of "early" music by me in mp3, ogg, and tracker formats. Some of my songs have probably got lost forever due to hard disk failures, but most of the nicer ones have continued to live thanks to the safe haven that is the Internet. I made most of my tracker music under the scene alias Yehar.

1. mp3
), for Lasse Öörni's Commodore 64 port of the game. For the game, some of the more funky parts of the song were toned town a bit; the .sid here is the original "funkier" version.

Yehar - Return of the Shadow Caster (

6. mp3
). At the time I was playing with Head Related Transfer Functions (HRTF's), and one of the reverb sources was a theatre in Cagliari, Italy.

Yehar - Exciting Exhibition (xm), for a game that my brother was writing, Matopas 3, a succession of Boulder Dash type of games starting from my MSDOS game Matopas written in Pascal (the file name was originally mato.pas, meaning "worm", for some reason). The game did not get finished. Here are the Matopas, and editor version of it and Matopas 2 games for DOS, only the first of which is finished.

Yehar - 7 Veljestä Romantiikkaa (xm): I was at a school theater for some time, making background music for three plays in total. This is for one I actually never saw live. There was also a "fighting part" in the song that sucked and I was embarrassed about, so I removed it. You won't miss it.

Yehar - Screwdriver (xm): A song that got into Lasse Öörni's B.O.F.H. - Severs Under Siege PC version.

Surfaze & Yehar - Da Shining (xm): Tuomas Mäkelä started this and I finalized it. Ended up as the highscore/death music in Lasse Öörni's BOFH - Servers Under Siege PC version, and was later included in the Commodore 64 version in SID format.

Yehar - Driving SAAB 96 on the Highway of Emotions (xm,

9. mp3
). At the time I was listening to Scooter, and I still am of the opinion that early Scooter was good stuff.

Yehar - Tropical Calculator (xm), has some bright, digitized Adlib sounds in it. The name probably reflects the good ol' school times and the use of graphing calculators.

Yehar - Friendlyware (xm), the song that purportedly got me into the local demo group Success Denied in Haukipudas, where I was going to lukio.