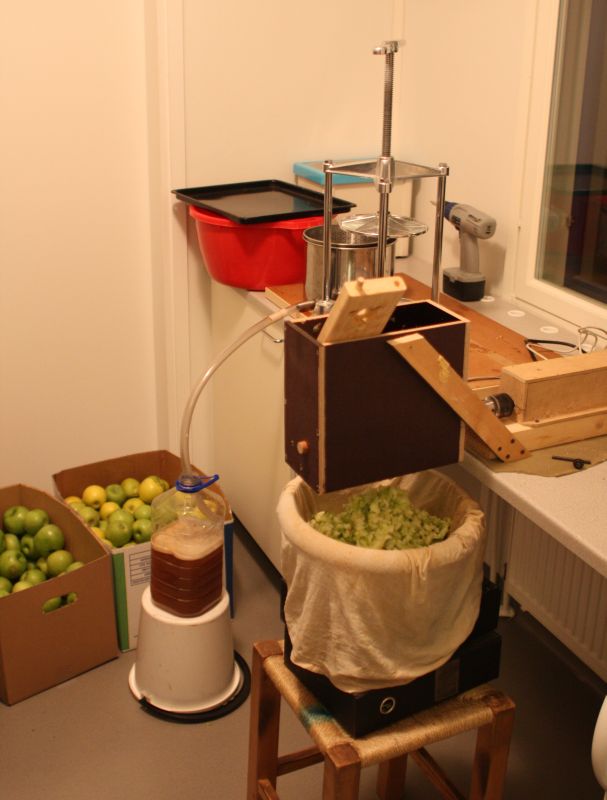 After the first snow had fallen, me and my colleague Fumi were given permission to pick the apples of the botanical garden at our university. There were about 30 kg of them. That yielded 14 half a litre bottles of cider (batch 2009/1). I used a centrifuge-type juicer from Lidl, but it died after about 10 kg of apples, the rest were juiced with a steam juicer (Mehu-Maija). Juice from the centrifuge was significantly better tasting. The cider turned out pretty good, but had a nasty taste of yeast or homemade alcohol. Perhaps because it was brewed in room temperature (21-22 °C) . Next time I'll try the refrigerator (7-8 °C). The alcohol content was 5.4 % from the sugar of the apples alone. Inspired by the moderate success, I started to think of a better way to juice, and found some nice "apple scratter" videos from youtube, and building instructions from web. I bought some supplies: 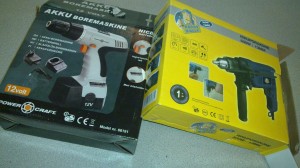 I demolished them. This is what was left after removing the goodies: 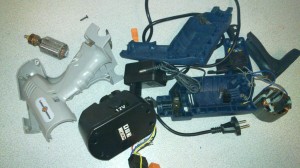 I proceeded to build a motor for the scratter, using the gear from the hammer drill and the motor and transmission from the cordless drill:

I also recycled the female DC connector from the battery charger. I have a regulated 70 W 12 V DC power supply, which I use to run the motor. It was not intended for use with motors or any other device that draws a lot of current to start. An over-current protection switches on whenever the current goes too high. The scratter had difficulties starting, especially after a jam. So I built a "booster" from three LiIon batteries in series (from a dead laptop battery, 10,8 V in total), connectable parallel to the scratter by a push button or by a switch for charging. It helps the power supply to start, and helps when there is much resistance to torque. The motor is very powerful, does not heat much, and the rotation speed is just right. It makes noise, but not too loud. During the process, I found the potential weak spots in the construction, to which special attention should be paid:

I used this kind of a screw pattern in the roller:

Here is the scratter in action:

The diameter of the rolling pin is not large enough. The apples don't like that the passage goes so narrow so fast. But assisted with a plank, in the apples go. After relieving my right hand from its cinematographic duties, things progressed much faster than in the video.

Yield is around 50 % w/w juice, when pressed with a 150 EUR Palumbo 4.5 L press (from Myllyposti) that I co-own with another work mate of mine, Silke.

I sampled the (imported) apple varieties that are sold locally here in Oulu. Expensive! The most suitable one for cider making was Granny Smith, costs about 1.50 EUR/kg. Cheap polish apples, 0.50 EUR/kg, were no good as they lacked the crispy, acidic taste. The second best was Jonagold, 1.30 EUR/kg or so.

I bought 41 kg of Granny Smith apples from Prisma at 1.40 EUR/kg, but got a discount and they also made some mistake in the weighing (to my advantage), so I paid only for 22 kg. Thanks to Marjo for helping out with a car.

I scratted the apples and pressed them. That took 2 ½ hours, not including cleaning up. The scratter worked well and atomized at best 4 apples per minute. The screw pattern I had used on the roller worked wonders, always leading the apple to the middle. I ended up processing one apple at a time, sometimes two.

I got about 23 L of juice. The price of the juice turned out 1.30 EUR/L, only half of what I had been prepared for. The taste was really nice and crispy (sour, tart), not exceedingly sweet though. I think the cider will be excellent with food if it turns out successful.

Some pictures of the action: 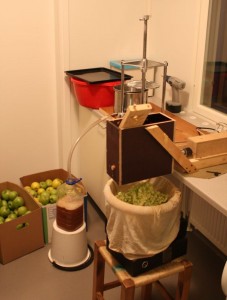 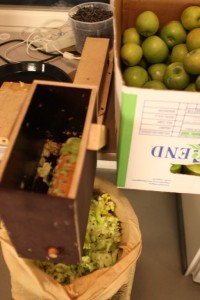 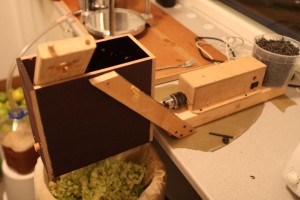 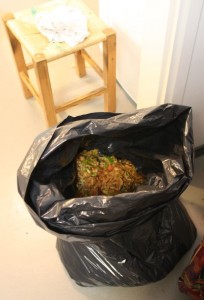 I divided the juice into two times 10 L parts for making cider, let's call them batches 2009/2 and 2009/2k where k stands for cooked (keitetty). This will be a comparative experiment to find out whether the juice should be cooked, which also sterilizes it. To both batches I added 2.5 ml of brewer's salt. I cooked batch 2009/2k until it boiled, and then let it to cool. I added 0.5 ml of wine yeast to batch 2009/2 and put it on the top shelf of the refrigerator, which is at 7-8 °C. Tasting the yeast, I recognized the bad taste from batch 2009/1. That's why the minimal amount of yeast this time. It might be a good idea to do what some people do if the bad taste is in the dry yeast: cultivate some yeast (with sugar?) and use that instead of dry yeast.

Having tasted the juice now a few times, I'm starting to think that maybe it was even too sour. Mixing in some other apples might have been a good idea. Time will tell!

The bucket 2009/2 was leaking somehow, so I moved both batches 2009/2 and 2009/2k into new buckets, at the same time trying to avoid pouring the sediment at the bottom into the new container. From the taste, it seemed there was already at least some fermentation going on, but not much alcohol yet.

I tasted 2009/2k, it was definitely fermenting. It was bubbly. But still very sweet. No bad taste, which is a good sign.

I tasted 2009/2. Was the same as 2009/2k. No peculiarities in the taste, so it seems pasteurization was not necessary (note: later, this conclusion will be shown to be incorrect...) .

Batch 2009/2  had fermented further than 2009/2k. Also, it was less cloudy, more yellow and had a somewhat sulfurous, rotten stench. So, pasteurization is good, after all. I liked the batch 2009/2k more. I hope tasting 2009/2 won't give me stomach problems. (No stomach problems ensued.)

Tasted 2009/2k, was good, and quite sweet still, and bubbly, so it is still fermenting.

Tasted 2009/2k, it was good. The sweetness was now less, meaning that fermentation is approaching the finishing line...

Tasted 2009/2k, the sweetness was now about right for cider, there was a somewhat dry taste emerging. Transferred to another bucket, stopped fermentation by adding sulfite, and also added a clarification agent. Shook, and left in the refrigerator to clarify. There was plenty of carbon dioxide. On the next day, added the second clarification agent.

Bottled and carbonated the cider. It turned out pretty good! Plenty of acidity, could be a slight bit less. Sweetness was quite ideal. This is not a dry cider. Hydrometer reading was +20 degrees Oechsle, which is 30 °Oe less than in the beginning, corresponding to 4.4 vol% alcohol, according to my calculations. An on-line fermentation calculator gave a different estimate, 4.1 vol%, which is, by taste (and by the level of induced intoxication), closer to the truth. The dreaded yeast taste that I wanted to avoid was minimal, but still there somewhere. For the next batch (if I shall make one) I would use the sediment from a previous fermentation, to get rid of the dry yeast taste. I have now saved some of the sediment, in the refrigerator. Also, I would try to avoid tasting the cider while it is fermenting. Now I know that with these parameters it takes about 4 months to finish. The final yield was 14 half-a-liter bottles, or 7 L of cider. I would not hesitate to try this with something like smoked salmon salad. I'm quite happy that I did not add any extra sugar, it is all from the apples

I have started another batch, but could not use yeast from the last batch. It had turned into vinegar... So I simply used 0.5 ml of dry yeast per 10 L bucket. An interesting thing to note is that Granny Smith apples bought early in the spring yielded less juice (less than 50 % by weight) than "new ones" in the autumn. I guess they are slowly drying. Also, they did not appear as sour. These might be positive things for the quality of the cider, but also increase the cost. I'm not absolutely sure how sweetness was affected, so I'd better not comment on that.

Here is the cider making process that I have used, with some additional observations:

Started making another batch of cider with my friend Nelli. Her boyfriend Timo has a temperature-controlled cabin for making beer, and we are using that, set at 12 °C. We bought 20 kg of golden delicious apples and added about 30 kg of local apples of different "decorative" varieties to add taste and sourness. We juiced the apples with my scratter and juice press, and cooked the juice, added 10 ml of brewer's salt and poured into the fermentation container, with a total volume of juice at 17 L. The juice measured 50 °Oe. On the previous day (2010-09-27) we had started a starter by adding 1 ml of dry yeast into 2 dL of sterilized granny smith juice at room temperature with the equivalent of 2.5 ml of brewer's salt / 10 L of juice. The starter was then immediately mixed and moved to 12 °C.

Moved the container from room temperature to 12 °C and added 1 dl of the starter.

CONTAMINATION! Bad luck. The cider got a bad smell, dark color and an off taste. Had to throw all of it away.  Have to sterilize better in the future! I have updated the instructions accordingly.