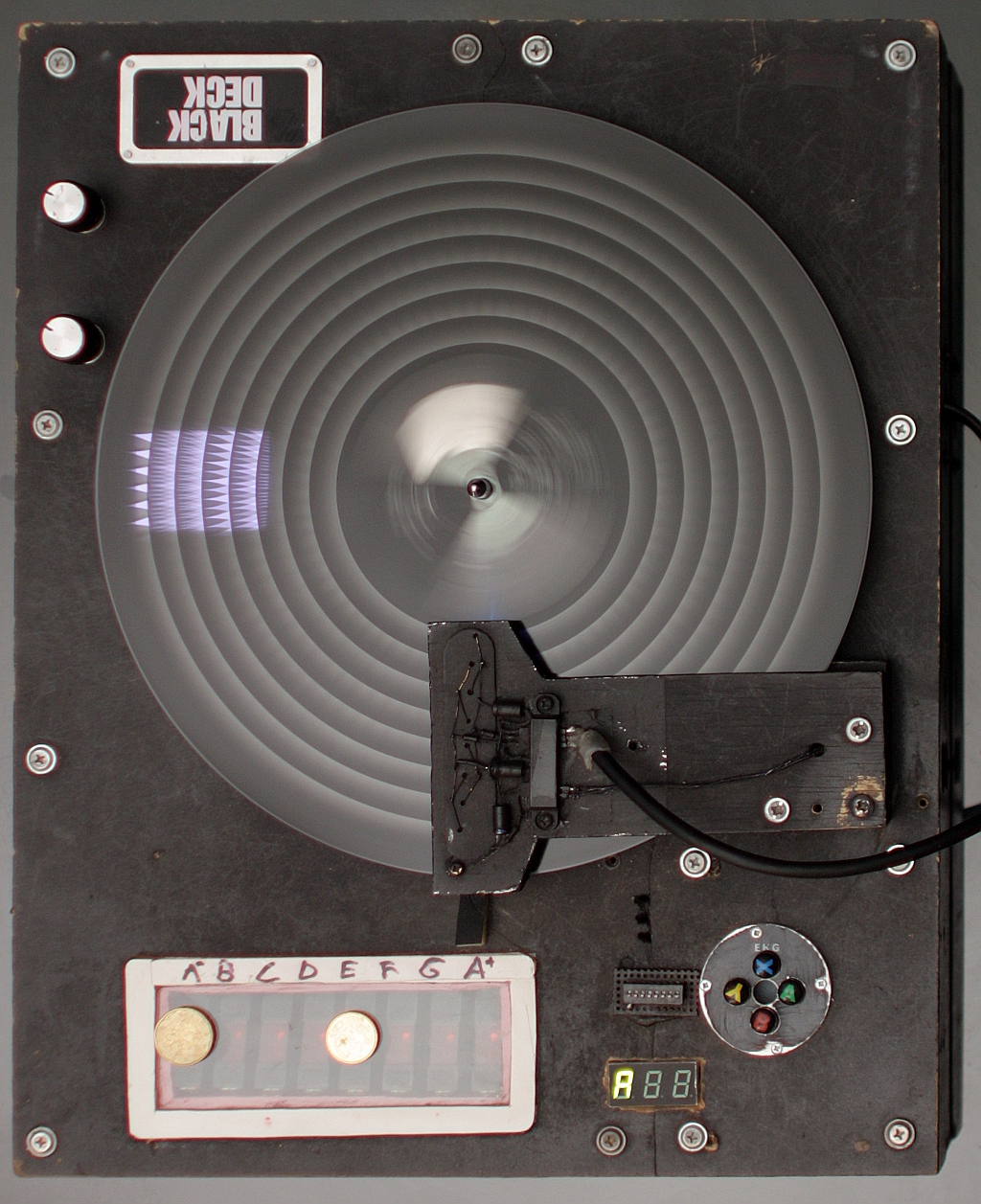 During the Christmas holidays of 2005, I started to build Black Deck, an opto-electric musical instrument that superficially resembles a record player. The name Black Deck comes from a philosophy of recycling and a Black & Decker name plate I had lying around. I had attended Jimi Tenor's concert in Oulu and seen his combination of a transparent rotating disc attached to a motor, a photosensor, and a table lamp. The contraption was called The Photophone. On his disk of black-and-white film there was a pattern of harmonics of a single frequency, with lower harmonics closer to the center of the disk. It was probably a square wave. I thought there was potential in the idea, and that it could be developed into a musical instrument capable of playing melodies.

From the local dump yard I found a direct-drive LP turntable. It was broken somehow; the rotation speed was not constant. A simple fix was to strip the machine of all the speed control circuitry. Luckily, this resulted in the motor going as fast as it could, given the dissipative forces in the system. I measured the rotation speed, 3.5198 Hz (211.188 RPM). Later I would find this to be temperature-dependent, with higher temperatures giving lower speed. From the same dump yard I had salvaged a bagful of phototransistors, Nokia phone keyboard flexible circuit boards with blue LED's, and easily enough E3S-AD83 photoelectric switches to make an 8-note keyboard. Before I started assembling everything, I made a bit of testing with simply a phototransistor and a rotating disc. I can't remember what the light source was, anyhow, it was at the other side of the disc. The sound was dark, but otherwise satisfactory. Encouraged by this, I made program in C++ that produced the image of a disc with the approximate frequencies of A Minor. I laser-printed the image onto two A4 transparencies and taped them together to form the complete disc.

My father Paavo Niemitalo kindly lathed a piece of plastic to act as a base plate, attached to the shaft. I bought a piece of ~2 mm transparent plastic for 5 €, and cut out an LP-sized disc to act as a secondary plate that would support the disc. Then I repeated the sound test. Well, apparently, the concept worked. So I proceeded to make a functional tonearm and to install the keyboard. The first revision was finished for Christmas 2005, and I could already play some improvised music (recorded with two discs in two takes) with it. The voltage was 12 V and I recall using 220 Ω series resistors to limit current going through the LED's. I had planned the tonearm to be connected to a piston, so that the tone of the instrument could be modulated by blowing into a tube. Unfortunately, too much force was required to move the tonearm, and I had to scrap that idea. But I did not fix the tonearm in place, to enable manual tone modulation.

In the first revision of Black Deck, the starts and ends of notes gave clicks. This was because the envelope generated by the photoelectric switches (that function as the keyboard) is simply on/off, with no smooth transition between the two states. Before New Year 2006, I had ready a filtering system that employed 33 μF capacitors between ground and the outputs of the photoelectric switches. There was an additional bank of 1000 μF capacitors that could be connected by a switch of a DIP switch, to achieve more gradual attacks and decays in the envelope, if desired. I had planned to route audio through the tonearm shaft into the chassis, but at least with unshielded cables this was too noisy, so at least until this date (2011-03-09) the audio output cable must be attached directly to the upper part of the tonearm. At revision 2, Black Deck remained in this state for a long time. I showed it off to friends over the years. Joonatan Elokuu was especially interested, noting that "one could record an album with Black Deck alone".

In autumn of 2010 Joonatan asked me to accompany him and Jaakko Padatsu (Lingua Fungi) in a mixed folk-ambient music performance at the Veljesiltamat event in Oulu, Finland. I agreed. Nominally, I functioned as part of Lingua Fungi. The three of us worked amazingly well together, and within 5 days we had ready a one-hour set based mostly on Joonatan's existing repertoire of songs. The works were released as an album in August 2012 under the Utupuu label, and can be bought as digital download at bandcamp. (You can read more about the artwork for the release).

By this time, a multi-effect electric guitar pedal, DigiTech RP80, had become an integral part of my Black Deck setup. The pedal made the sound more interesting and versatile, and extended the modulation capabilities of Black Deck. Here is a a sample.

Because I had made all the discs in A Minor, we had to transpose everything to A Minor for the gig with Joonatan Elokuu and Lingua Fungi. And it appeared that the tuning drifted to about 338 Hz instead of the standard 440 Hz. This was worrisome, because if the temperature changed a lot during the gig, Black Deck would go out of the tune of the other instruments. Luckily this did not happen to a noticeable extent at Veljesiltamat. It was probably a good idea to let the instrument warm up at the location beforehand. After the gig I added 10 kΩ helical potentiometers in series with the two ~16 V AC input phases to the motor driver. A bit risky, because the helipots could easily be fried. I did fry the whisker in one of them, but managed to replace it with a sturdier piece of wire. This setup could be called Black Deck rev. 3.  During summer 2010 I had met with Jussi Alaraasakka (Nick Electro), who played electronic music mostly with groove boxes, and joined him and the other guys to play Black Deck in Oneironaut. Use of the tuning knobs was a bit difficult, because when switching between songs that required different tuning, I had to play Black Deck while tuning it. So it was not that friendly for the audience, or for my bandmates. Before we had our first gig, I managed to finish a stroboscope that could be set up to flash at the frequency of any wanted note. Viewing the stroboscope through the rotating disc displayed a still image when the disc rotated at the correct frequency. So I could tune silently and accurately, to everyone's satisfaction. In 2011 I integrated the stroboscope into Black Deck, rev. 4. This revision has the original LP turntable power supply removed, and contains integrated +5 V, +16 V and -16 V power supplies. The photoelectric switches, the stroboscope, and the phototransistors work at +16 V, and the motor driver uses both +16 V and -16 V. The tuning potentiometers are in series with the power lines to the motor driver. By turning off the power supply of the other polarity, one can make a kind of fast vibrato, with the disk accelerating only at certain angles of the drive shaft, and the dissipative forces slowing it down at the others. At the heart of the stroboscope is a PIC16F877A microcontroller, running at +5 V, telling a fast-switching power transistor when to light up the strobo (iPod display backlight).

Over the winter 2010-2011 I continued to play Black Deck with Oneironaut. Joonatan Elokuu and his wife Helena lived at my place for some time in early 2011, giving us another opportunity to work together musically. In that time, we finished three pieces. Joonatan played electric quitar and did the vocals, and I played Black Deck and did additional sampling, mixing and post-processing. Helena did additional vocals and Kata Havahu played saxophone. The work has been released as a downloadable extended play (EP) via Kiiltomatolyhty/Utupuu and can also be found at SoundCloud.

The C++ source code for the disc image generator is here: valo1.0.zip. It works at least on Windows with Dev-C++.