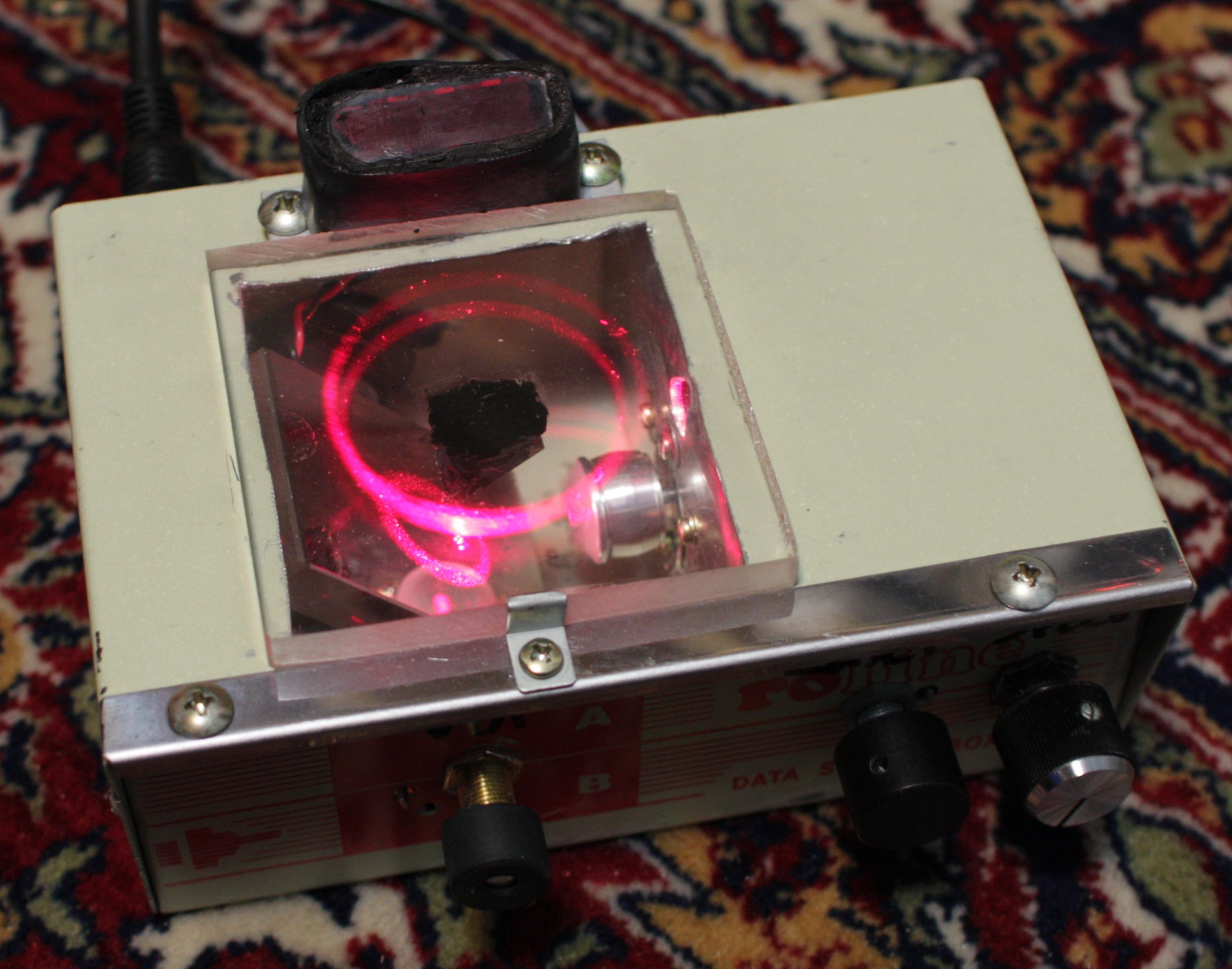 I'm going to call this musical instrument (or rather a tone generator) Rotolaserator:

Here's how it sounds like, with reverb, gating and echo added:

And here it is giving the bassline to music (in the first half there's also the softer bassline from Korg Monotron, look for the "power-line-like" sound for Rotolaserator):

In principle it is a laser circle scanner with a photocell to detect light reflecting from objects put in the laser's path.

The project started from the idea of making a customized version of Black Deck for Jaakko Vanhala, who is a noise artist. Because of the choice of musical genre, I thought there was no need to produce tones in common musical scales, hence a single "track" should suffice. I also wanted to give more emphasis to creation of sound by accident, whereby the discs would be replaced by everyday views.

The first approach I tried was to create a camera that instead of a fixed rectangular sensor has a dot-like sensor that moves on a circular trajectory on the imaging plane:

After the failure of Rotolaserator 1 I got an idea: Let's make the device scan the scene with a laser. This would also eliminate the need to focus the lens. The laser way turned out to be successful. The principle was:

The design was dictated by that I wanted it to fit in a very small box. So the motor would need to be oriented horizontally. The slightly tilted mirror attached to the shaft of the motor, as rotated, reflects the laser beam at an angle that is rotating. The first mirror on the path of the laser is affixed to the window. In designing these kinds of optics there was constantly the problem that I wanted something to be in the middle of the circle drawn by the rotating beam, but that something required wiring, and wiring would cut the beam. For example, the center of the window would have made a perfect place for the sensor. But a sensor needs wiring and wiring is not transparent. So I could not put the sensor there. Rather, I put it on a pedestal outside the box, next to the window. There were also a lot of stray reflections going on inside the box, principally from the window, so I could not put the sensor there either.

Let's have a look inside:

Because the DC motor could not be made to rotate slowly but would suddenly stop if I adjusted the speed too low, I added a brake:

The brake is working so-so. Slow rotation using the brake is not even, as the motor is stronger at some angles. Braking is also making the motor overheat a bit, if used for a longer time, and the motor turns noisy if too hot, as if there's some crap flying around inside. But hey we are not here to treat motors with respect, let's just see how long this one lasts before we have to change it. I do have spares.

I got some feedback from Jaakko Vanhala and started making a new model that could be made to rotate very slowly and would be smaller and less prone to be affected by the dangers of travel (= impacts). I came up with a simpler design:

The gears can be easily bypassed to make the laser rotate faster.