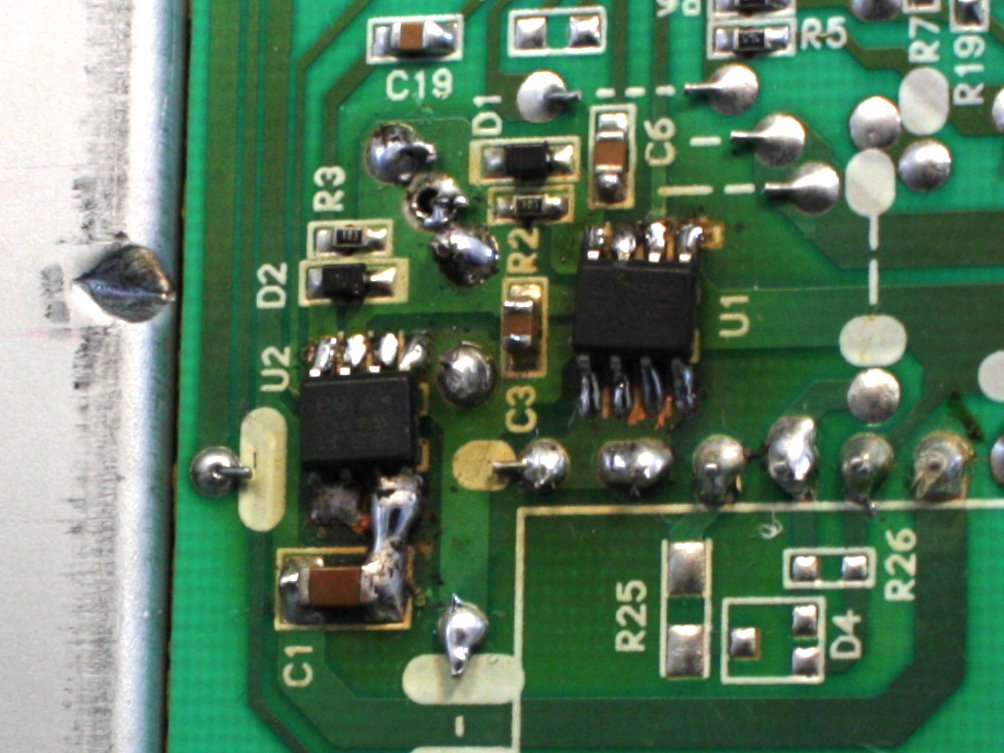 I found from a dumpster a Hyundai L17T LCD TV, pretty much a monitor with an analog TV tuner. I tried to turn it on, but the power indicator light was simply flickering slowly, indicating a short circuit somewhere. Nothing on the screen. The monitor was trying to power up, but then a fail safe switched it back off. And the cycle repeated.

I opened the monitor and saw that the circuit board had darkened around two components, identified as FDS8958A dual N & P-channel PowerTrench MOSFET's. A darkened circuit board should mean heat, and heat is an indicator of component failure. Solder around the components also looked a bit jagged, probably as a result of a cycle of melting and solidification. I could recognize that part of the circuit as the inverter power supply for the fluorescent backlight lamps. I scratched away the circuit trace that supplied power to the inverter, to see if the monitor would turn on without the backlight:

The monitor turned on without problems this time, and I could see a faint picture on the dark screen. In hope that it was just the power transistors that had failed, and that the rest of the inverter circuit was still OK, I looked for replacement components from my collection of electronics junk. Thanks to a hint from my brother Veli-Matti, I could find identically specified components from an old main board:

The suitable components on the main board were AP5401 N and P-channel enhancement mode power MOSFET's. I carefully removed two of them from the main board, and replaced the inverter power transistors with them:

I didn't save on the solder, because I thought the transistors might benefit from a bit of heat sinking. After the repair, the monitor worked as good as new. Another piece of trash less in the world! I didn't have time to take a picture of the working monitor (or the broken one), so here is one fished from Internet to your satisfaction:

The following day the monitor left my disposal to be slowly on its way to Gambia where my friends at Apu-Paku Ry are going to build a music recording studio, among other great things that they will be doing.