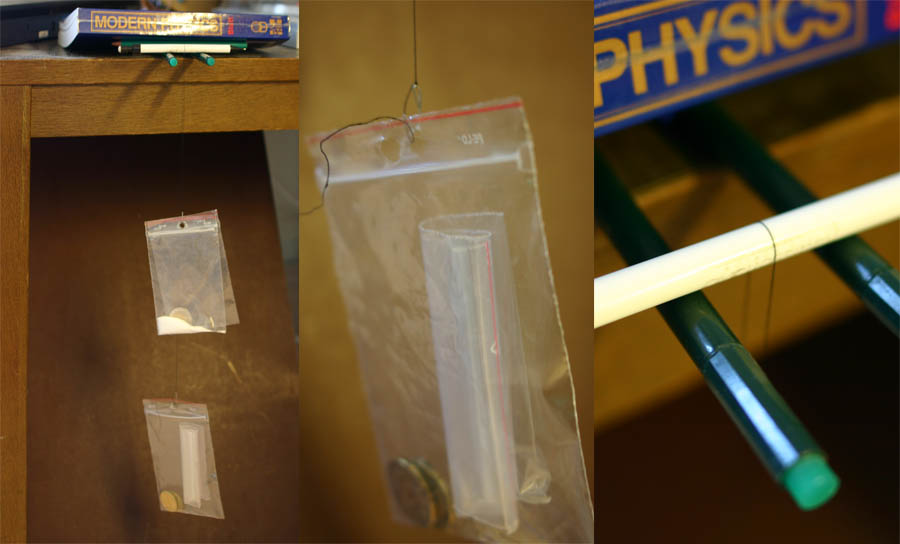 What if you suddenly need a scale, accurate to one gram? Here is the solution, in case you live in the euro zone. (Something like this has actually been done before!)

The physical mass of each euro coin is actually standardized. So they can be used to measure mass of other objects using a balance. Here's how I measured 3 grams of salt. See the figure 1 below. A thin black string goes around a round pen that may freely roll on top of two pens well leveled on a table using a pencil and a book. On each end of the string hang two bags, by hooks made of staples (was out of paper clips). One bag is for the coins and one bag is for the sample (an empty bag is included in the other end for balance). The first coin bag contains two 20 cent coins. That's 11.48 grams of coins. The other coin bag contains a 2 euro coin with a mass of 8.50 g. The difference is 2.98 g, near to what we wanted, 3 grams. Salt is added to the sample bag (next to the 2 euro bag) until the pen no longer rolls. I do admit that it is a bit cumbersome to use, but if you have nothing else, it still works. A balance made from a rod would be more reliable, easier to handle, and could be calibrated so that different weights are measured by moving the position of the standard weight.

If you want to measure other weights (0.5-50 g), you can use table I as a reference. No 1 cent and 2 cent coins are used in the combinations, because those coins are not available in Finland. If you want the extra convenience and accuracy provided by them, have a look at table II. The tables also give error limits at two standard deviations. The error analysis is based on the presumption of 0.5 % systematic and 0.5 % standard deviation random error in the masses of the coins, agreeing with an analysis on Belgian 1 euro coins. The coin combinations in the tables were found by first systematically searching for the combination that gives the most accurate mass, and by then finding the most convenient coin combination that gives at most 25 % more error.

Note that this method of measuring the mass is better suited for weighing a wanted amount of a substance rather than for determination of an unknown mass.